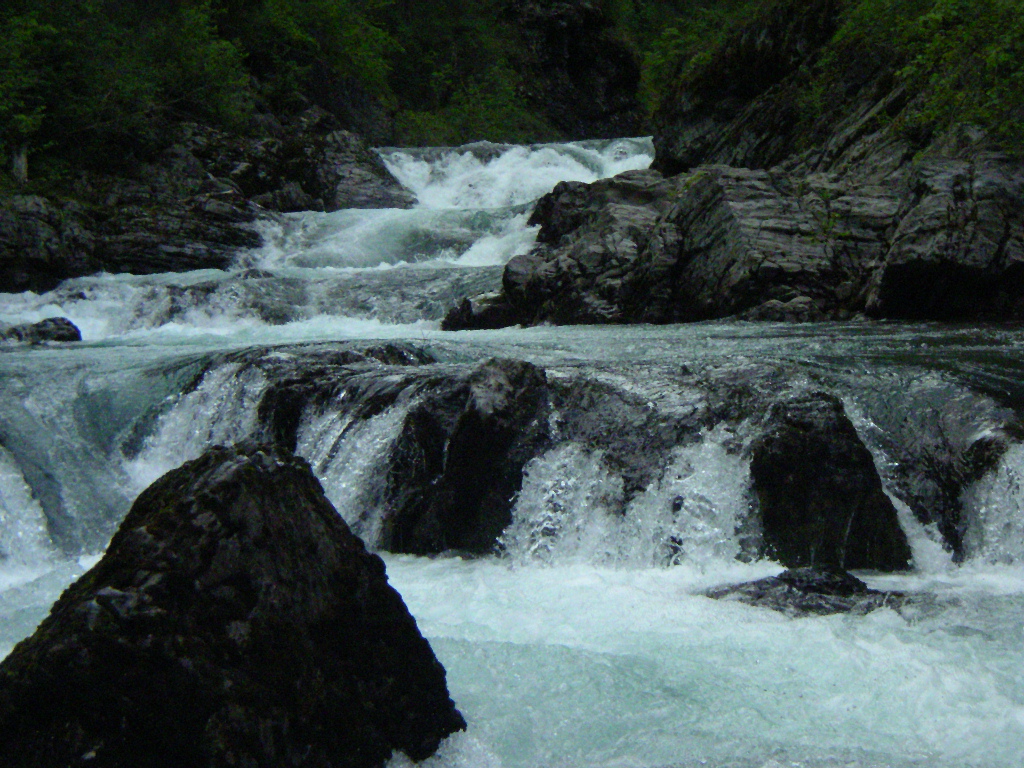 As a general rule, look for at least 4,000 CFS on the St. Joe gage at Calder for Slate to be running, though Very low flow runs are possible. The season is April to mid June, varying widely with snow pack. Its best to ask around for recent beta before attemping the run.

Slate Creek is a steep technical run best left to those with previous creeking experience. It flows through a deep, narrow canyon that is nearly impossible to exit on foot. At high flows Slate is big, pushy and intimidating with large, unavoidable holes in the bigger drops. At lower flows, it takes on a pool drop character with tight, technical rapids of exposed bedrock ledges and slides.

The first major drop is a long class III+ slide visible from the road not too far below the put in. If you find this rapid intimidating, take out immediately and climb up the bank to the road (river left). From here down the run becomes much more difficult, and the canyon walls become steep and constricted, making hiking out nearly impossible. Check out one of the other nearby creeks in the area instead.

The middle section of the run stays very busy with ledge and slide type drops. A couple of the larger ledges can be very difficult to spot, and only offer small last minute eddies. Stay alert and do not run anything blind. One of the more distinct rapids in the middle section is Pinch, a tight slide drop that terminates into a powerful reversal against a wall.

Where the West fork of Slate Creek enters in a Cascade on river right , and a powerline spans the canyon high overhead, is a two part drop called Horseshoe Falls (aka West Fork Falls ). It is class V at higher flows, mellowing to class IV at lower flows. A short distance below West Fork Falls is Triple Drop (Class V), a series of high ledge drops in close succession, terminating in big retentive holes. Watch out for pin potential on the side routes of drop #1, and watch out for the big hole in drop #2, it has delivered some serious beat downs.

It is generally easiest to scout or to portage Horseshoe Falls and or Triple Drop on river right. The last major rapid, "Wall" (Class IV), is immedeately below triple drop. From here its a short, fun cruise to the main St. Joe through busy boogie water.

If you're coming from the East, exit Interstate 90 at the Wallace, Idaho (visitor's center exit). Work your way south through town following Placer Creek up a small canyon to road 456. Take 456 over Moon Pass (4,931') and down the N. Fork of the St. Joe to the town of Avery. From Avery, go roughly 7.5 miles downriver, past the Avery ranger station (marked as the town of Hoyt on some maps) about 1 mile, to the Slate Creek Bridge take out. Call Scheffy’s store in Avery to find out if Moon Pass is open for the season.

To get to the put in, return to the Avery Ranger Station and take road 225 (look for the garbage dumpsters opposite the ranger station). The road climbs a steep open hillside to the canyon rim. On the canyon rim, where the large power lines cross, take the road left fork and begin dropping into the canyon. Just after the road meets creek level, there is a small turn out to the left which leads to a primitive campground with the ruins of an old miner's cabin at the Franklin Mine. Just downstream from the cabin is a nice beach put in. A high clearance vehicle or 4WD is recommended.